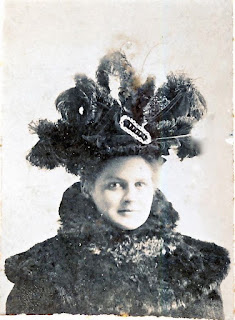 This is a photo of my paternal grandmother.  The photo was most likely taken before 1905 and very possibly before 1900.  I love the hat.  She never had much hair after running a very high fever when she was quite young.  I imagine this hat made her feel quite fashionable.

These three images show three different views of what I believe is some kind of an aluminum can opener.  I can't find any images online that matches this one.  One newspaper article from the Toledo Blade - Apr. 27, 1946, pg. 7 quotes someone as saying the Clyde Cutlery Co. was organized in 1850, but I haven't found any proof of that.

There seems to be quite a gap from the blade and the piece that goes on the outside edge of the can for it to be a can opener like one used in a kitchen. 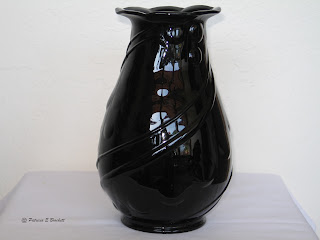 This black vase belonged to my paternal grandmother and has been passed on to me.  I've always found it interesting, because when light shines on it there is kind of a deep purple/red coloration that is visible, but otherwise it appears totally black.  I know she had it in the 40's and probably before that. 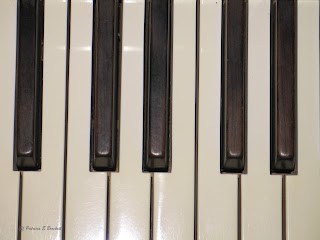 This is part of the keyboard on the upright piano that my parents purchased about 1952. It was bought from a piano teacher who was replacing it with a grand piano.  See my post TToT:  Ten Things of Significance 7/4/15 for a photo of the piano. 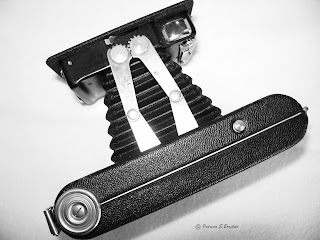 This is the camera my parents used to take many black and white photos. 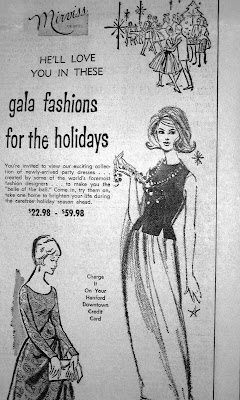 This ad was printed in The Hanford Sentinel, Monday, November 14, 1963, page 5.  I remember going into this store various times years before when one of one of my aunts worked there doing alterations of the clothing the women bought there. She was quite the seamstress.  That store is no longer listed among the clothing stores in Hanford, California.
Posted by Pat B at 10:36 PM