To take time to be still, listen, and look

Late this afternoon I asked my husband if he'd like to go over to the nearby wildlife refuge for a little bit.  Since we both enjoy doing this, I was pretty sure he would want to go.  Many birds are starting to show up during this time of migration, so we were expecting, at the very least, to see a lot of geese.  However, soon after we got out of the car we heard the sounds of a couple of great horned owls.  As we proceeded down the boardwalk, we met some other birders.  After a time of all of us being still, watching and listening, one of the birders spotted a great horned owl sitting on a branch high in one of the trees off in the distance.  (The second great horned owl had flown off soon after we arrived.)  It was kind of hard to get very good photos of the owl due to the many branches which were in the way.

As we were walking on the boardwalk, we saw a caterpillar walking on the railing.  I hadn't seen one quite like it, and thought perhaps if I took a photo of it I would be able to identify it when we returned home.  The identification is going to take me a little longer to do I think.  A few weeks back I took a photo of a caterpillar when we were at a different wildlife refuge.  It is one that is commonly seen, and probably the first kind of caterpillar I remember seeing when I was a child. 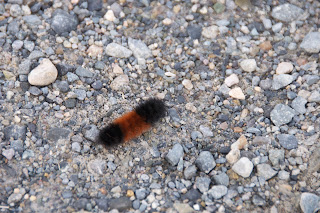 This is the Woolly Bear Caterpillar (isia isabella or pyrrharctia isabella) which will turn into the Isabella Moth. 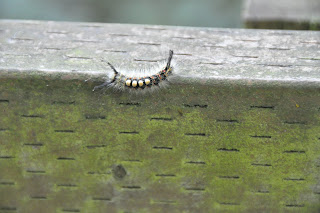 For now I'll leave this one unnamed.

Thought for today:  Everyone needs to make time to be still, to listen, and to look.  Quiet introspection is an important part of living.
Posted by Pat B at 11:22 PM 1 comment:

Yesterday as my husband and I did yard work around our home, we heard many flocks of geese flying overhead.  It was a beautiful fall day with sunshine and a clear blue sky.  As I reflected on how much our dog seems to enjoy being outside on such days, noted by his smiles, I found myself wondering if geese and other birds enjoy flying on some days more than others.  Granted I realize that there are birds migrating at this time of year, but I like to think that even birds can experience joy. 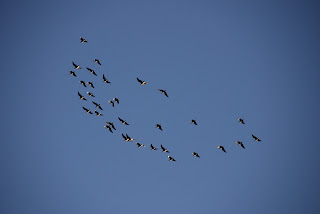 Quotation:  "The sun does not shine for a few trees and flowers, but for the wide world's joy."  (Henry Ward Beecher)

To see the humor in the situation

Some things are just funny! 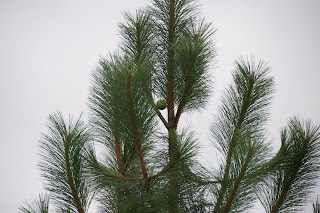 One day my husband was throwing the tennis ball for our lab, only this time the ball never made it to the ground.  It got lodged firmly between two branches high up in a pine tree.

On an excursion to Nisqually National Wildlife Reserve we came upon a sign that had a visitor strategically placed upon it.  Perhaps this little frog was nearsighted :-) 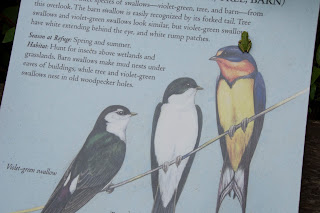 To learn something new

Following the lead of my children and some of my friends, I've decided to join the ranks of bloggers. This week I attended a Relief Society meeting where someone talked about the basics of blogging. That got me to thinking that maybe this was something I too could do.
The name of my blog is from a line in Ecclesiastes 3:1, "To every thing there is a season, and a time to every purpose under the heaven:" I have always loved reading Ecclesiastes 3:1-15 because it seems to say so much about the seasons and times of our lives here on earth.
Having experienced a great many seasons of my life already, and hoping to yet experience many more, perhaps from time to time I can add a few reflections of what I have learned or am in the process of learning from those experiences.
A reflection: If only we could have envisioned how big some of our plants would eventually be when we planted them those many years ago. . .when there was so much bare ground crying out for something to be planted there.
A lesson we are still learning: If at all possible, don't put off pruning!
Posted by Pat B at 9:49 PM 1 comment: