Sometimes my Ten Things of Thankful blog hop post is harder to compose than at others times.  This is one of those times.  I started thinking about the post earlier in the week, but here I am doing this at the last minute.  When there is a lot in the heart and mind that could be said, but wondering whether some of those things should be unspoken or unwritten to the general audience, I've been waiting for some inspiration.

1 and 2.  Thankful for beautiful natural events.  Thankful for welcoming neighbors.
Last Sunday my husband suggested we call our neighbors to see if they were going to be watching the moon that night, and if they would mind if my husband set up his camera in their driveway to take some photos of the eclipse.  They have a better viewing spot than we do.  They were planning to be home and said that would be fine.  When we arrived, we discovered some other neighbors and their visiting guest from England had called our hosts after we had with the same inquiry.  My camera is not nearly as powerful as my husband's, so I enjoyed sitting on the deck and visited with our hosts. Since it was kind of a brisk evening, those of us who were not standing up behind high powered cameras sat bundled up drinking some hot cocoa and eating some chocolate chip cookies provided by the hosts. It was a most enjoyable evening and a memorable one, since some of us may or may not be around the next time this kind of eclipse happens (year 2033).  That thought was a little daunting.   Only time will tell.

3 and 4.  Thankful to be able to go visit with a friend on her birthday, which we often think of as a day of celebration, but I knew was the least thing on her mind that day.  Thankful to have a longer than normal visit with my Mom the same day.
Sometimes I have promptings several days in a row (takes a while sometimes for me to get the hint) that I should do something.  In this case it was to go see a friend who is dealing with such a hard situation.  Her husband has ALS and is requiring increased care.  I was glad I went, but so wish I could take away some of her burdens.

My visit with my Mom ended up being a longer one because the doctor was there to do his every-60- day exam of Mom.  (Somehow I didn't receive the notification he was going to be there, and just happened to be there when he was.)  He ordered some drops for her ears, and I took one of her hearing aids with me to have it cleaned.  (Yesterday I received a call from the nursing center that the other hearing aid isn't working now.  I guess I should have taken both of them to be cleaned at the same time, but I didn't want to leave her with no way of hearing.)

5.  Thankful to learn some more things about my camera.  I really don't want to share how very much of a beginner I am in using my camera.  Also, if by some chance I know more than you do (LOL), I certainly don't want to confuse you with the details.

6. Thankful to be able to spend some dedicated time to pruning some more bushes in our yard.  This time the brunt of the pruning was the forsythia.  This isn't even the time to be pruning it, so we may not see many yellow blossoms this next spring, but the bush was taking over a major portion of the yard.  I also began pruning back a juniper that had gotten severely shaded by the forsythia.  When we planted the different trees and shrubs, the spacing seemed right all those many years ago, and if anything, maybe too openly spaced.  This pruning project is by no means done, but seeing some progress feels good.

7.  Thankful to see that I can memorize more than just one scripture and more importantly that I am able to remember more than one at a time.  I use an app on my iPad which helps with this memorization process.  Each week I'm adding another one to memorize, but continuing to review the ones I've already learned.  One of the challenges I have in recalling the scriptures, is with the starting word or phrase, and so I have to come up with kind of brain gimmick  to remember.  For instance, one scripture begins with "Wherefore men."  I have to think "Where4 men."  That may not make sense to anyone else but me, but that is what works for me.

8.  Thankful for the memories that come into my mind of things I have experienced with my ancestors.  This week I thought of how much my paternal grandmother loved listening to Art Linkletter's  People are Funny radio show.  Grandma had an infectious laugh, and I think that is why I remember this show.  She would get so tickled listening to it.  As I was thinking this week about how much of the color orange we see this time of year, I remembered when I first met my future mother-in-law, she told me her favorite color was orange.  I'd never met anyone who liked orange as their favorite color.  In her later years of life, she denied that had ever been the case, I suspect because of some dementia she was showing signs of having.  Are there things that remind you of your ancestors?  It might be something you read in the newspaper or a book, or something you see as you are out for a drive, or something you see at an amusement park, or a nicknack in someone's home.

9.  Thankful for being able to watch General Conference yesterday and today.  When I first joined this church in 1971, the only way to participate in conference was to drive to the closest stake center where we could listen to an audio broadcast.  After a number of years we were able to view the conference by direct wire broadcast at a stake center.  As the years went by, we could watch it on TV from homes that had access to certain channels.  Now General Conference is available in many areas of the world in one way or another.  I can watch it from home, the stake center and/or read the printed talks in the church publications.  I enjoy reading the scriptures, but I also enjoy hearing the counsel which is given to those living in this day and age.

10. Thankful for time spent with my husband on a drive through the Cascades one day this week.  This was my longest venture of sitting in a car since my surgery.  We did stop various times, so it was manageable, and I feel confident now that traveling longer distances will be doable in the future if we just stop frequently. 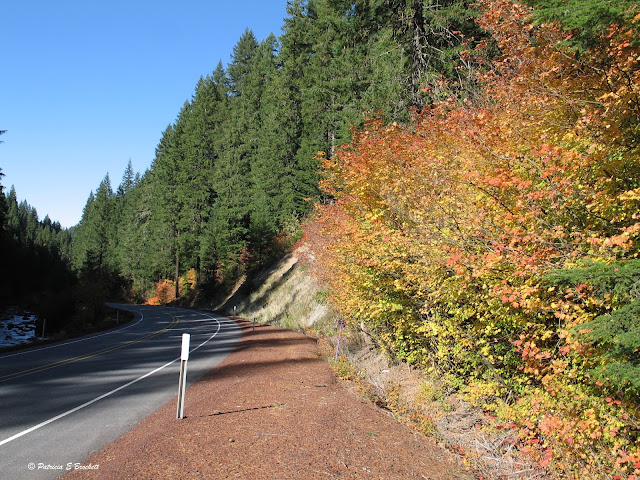