Why do I continue to try to write a story each week using just six sentences? Perhaps it is because Denise of Girlie on the Edge's Blog invites blog hop participants to do so, but for me it is more than that. I kind of look at it as a writing challenge, even though in the sphere of writers I . . .well I'm not even going to go there. I just like stretching whatever bit of creativity I have, and I landed at this writer's blog hop. Denise is the host of Six Sentence Stories and the prompt this week is "reach." Newcomers are welcome. Just click here for details. 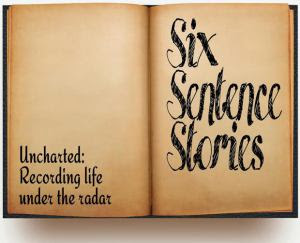 The surface of the large panoramic photograph hanging on the wall was smooth making it impossible for her fingers to feel again some of the textures of the columns seen throughout the national park.

As her steps were carefully being measured on her treadmill trail, she pictured herself again carefully making her way along a well worn path in the national park with some of the most colossal rock formations she had ever seen.

Time passed almost seamlessly from the now to the then, from the almost mundane of just attaining the daily physical fitness goal to one of the most awe inspiring alfresco experiences she had ever had.

Although she couldn’t physically step from the deck of the machine, to which she was tethered at the moment, into the photo like those who having the ability of feeling they are in a different plane or state of existence just by putting on a pair of goggles to enter their chosen virtual reality, she could reach with the tentacles of her mind and almost feel she was there.

The sky above painted with the puffiness of cumulus clouds, mazes of salmon colored hoodoos jutting heavenward from the valley floor, and imagining what it would have been like to inhabit such a place carried her away from what she found monotonous.

Now feeling rejuvenated physically from the exercise of her body and her mind, she was ready to get on with her day after once again connecting with the grandeur of the world.
Posted by Pat B at 3:10 PM