The blog hop Six Sentence Stories sent me dipping into the past.  I'm linking my six to Six Sentence Stories - Light.  What memories come to your mind when you think of the word light?  What creative juices start flowing when you receive this cue?  Why not write a six sentence story in a post and share for the blog hop?  It is fun!

Farming with two preschoolers in tow was difficult, and keeping the bills paid was challenging enough that he demanded that his wife get a job as a secretary to make ends meet.  Perhaps if she had been at home that day, the children would not have been so scared and would not have been left alone in the big old bare-bones house while he took care of the errand that took longer than expected.

The sun had set, and with the house being pitch black, fear crept in when he hadn't returned. Being there in the dark seemed like an eternity to the little girl and her younger brother.  They were standing in the corner of the large room when they heard the creak of the door opening.  It was only when they heard the familiar click and saw their mother standing under the high string leading to the light bulb that their fear melted away. 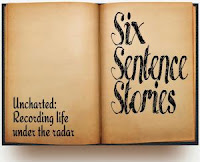