Finish the Sentence Friday - It's back to school time and . . .

As I hear reports of young children heading back to school in the fall, I sometimes recall a few of my early school days. This blog hop hosted by Kristi Campbell of Finding Ninee and co-hosted by Kenya G. Johnson of Sporadically Yours gave us an apropos cue for this first Friday of the month. I am linking up to Finish the Sentence Friday - It's back to school time and... . I hope you will wander over to the site and read some of the other posts. Some may not be their own memories, but posts about their children's experiences or about what people do while the children are in school. One never knows where the bloggers thoughts may lead. 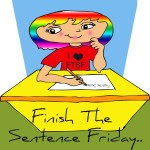 Memories from my primary grades

Finding out the only girl I knew my age, that would be going to the same school as me, was placed in the other first grade room did not make me happy. She had gone to kindergarten like a lot of the other children, but I had not. My best new friends that year were Penny who moved part way through the year, and Mary.

Memorable experiences that year: 1) the kindness my teacher showed toward me when my lunch tray got bumped accidentally and hot soup spilled onto my socks and shoes; 2) struggling to hang on to a balloon given to me on stage during a play when a boy decided to snatch it away from me; and 3) Dick and Jane books.

I feared that I would be placed in a classroom that was taught by an older woman teacher that some kids thought was mean. When I learned that my teacher was going to be the other teacher, I was quite relieved. That year the neighbor and friend who had been placed in the other classroom when we were in first grade was actually in the same second grade classroom as me.

Memorable experiences that year: 1) Being disruptive by getting in a giggling fit with my close friend during class (The teacher made us each stand quietly at the back of our rows until recess began. Because I had not gotten in trouble in school before and I was kind of shy, this was terribly embarrassing to me.); 2) Moving out of state in the spring and having my new teacher let my mom know right from the beginning that I would probably have to be held back a year based on the what she knew of the educational expectations of students who lived in my former state (The teacher wanted me to stay indoors during recess and lunch break for several weeks to complete a workbook that the other students had finished earlier in the year just so I could prove to her that I understood the material. At the time, I felt this was so unfair.); 3) Having to walk to and from school for the first time. (I had ridden on the school bus in my former state.)

Over the summer we had moved to a farm and in the fall I entered third grade in a two-room school house. Third grade consisted of one row of students in a classroom of first through fourth graders. My brother entered first grade that year, and there were challenges for both of us because of having the same teacher who in frustration made verbal comparisons comparing the two of us. Unlike schools now where there are often parent volunteers or teacher aids, the teachers had no help then to guide students who might need help refocusing or need one-on-one help.

Memorable experiences: 1) Learning to crochet hats during the lunch break. (The teacher taught girls from any of the grades, first through eighth, who wanted to learn how to crochet.); 2) Being told that the students could bring roller skates to school and we would be allowed to roller skate in a covered playground area that had a cement floor.