There are myriads of reasons people decide to blog. My decision to blog was to take my married daughter's advice that I should just try it, even though I felt that I was a little past the age for trying such things. I was barely familiar with the term blog then, let alone a blog hop. She had been participating in a blog hop and told me how much fun it was. With some assistance from her in the beginning to get my page set up, I forged ahead. I have not regretted that decision.

This post will be linked to the Six Sentence Stories blog hop. There are going to be some interesting stories written this week given the prompt word is brush. I hope you are as curious as I am to see what the other writers will be writing and linking to Denise's Girlie on the Edge site this time. She is the host for this blog hop. Click the link and read away. What would your story be? 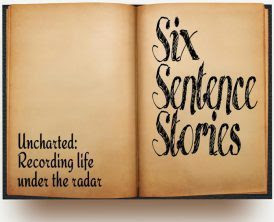 He needed some respite from all the manual labor he'd been doing assisting the contractor building the new home for his family, so he'd taken the day off to go fly-fishing on a river with a friend that morning.

She continued with the preparations for the move, but all that was put on hold when there was a telephone call saying he was in the hospital in another city.

Although she was exhausted from her labors and from the heat of the day, she quickly made arrangements for the kids, and grabbed some of his personal items to put in the car to take to him.

Without anyone to help keep her alert, she turned on the radio and rolled down the windows, but even at that her head began to nod as she drove the many miles of straight freeway.

Suddenly her head jerked and her eyes popped open when she felt what seemed to be her deceased father's hand on top of hers trying to give her strength to steer.

Seeing the edge of the road, she veered the car back into the proper lane and stayed extremely awake the remainder of the trip after what had seemed to her to be a sudden brush with death and help from the beyond.
Posted by Pat B at 7:45 PM