Finish the Sentence Friday - A photo and the story behind it

Photos galore, but which one should I choose? I know, this one!
Recently I took a photo while we were walking through a garden full of rhododendrons and azaleas and saw this and just couldn't resist snapping a photo. Now I have an opportunity to share it with you for the blog hop Finish the Sentence Friday - A photo and the story behind it. Kristi Campbell of Finding Ninee is the host and Kenya G. Johnson of Sporadically Yours is the co-host. Since I really have no idea of the story behind the photo, I decided to get a little creative. Enjoy and click the link to see photos and stories others are sharing this time. 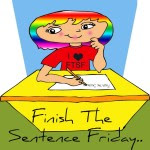 It was properly displayed in an upright position so as not to go unnoticed and be likely to slowly decay amidst creeping vines and moss on the earthen floor over the eons.

Had it been part of the slingshot of one of the giants who once roamed the earth, according to biblical and historical records?

Was the ogre in Jack and the Beanstalk a lover of not only beans, but of the ancestors of the rhododendrons and azaleas included in this forested area?

Maybe, instead of being used to fling heavy stones, it was used as a tool to hold up part of a heavy vine once used  to ensnare an unsuspecting creature.

Another possibility is that it  could have been utilized as a crutch for an injured dwarf, or used as a cane for an taller aged dwarf from the folklore kingdom.

However it came to be in this spot and in this position, it did not go unseen by me.