It is time for a new blog hop challenge.  It is TJ's Household Haiku Challenge - Watch.

For the last few years I've watched my mother's memory slip away piece by piece due to Alzheimer's Disease.  Sometimes when a person's memory begins departing, one wants to retain as much normality as possible, or what one perceives as normal.  Years ago when it became harder for her to read the small numbers on her watch, she decided she needed a watch with a larger face and numbers.  I'm not sure if a family member gave her this watch, or she bought it herself, but she continues to wear it.  She is beginning to have difficulty telling the time.  I'm unsure if that is vision related or due to Alzheimer's Disease.  The battery had died recently, so after getting the battery replaced I took a photo of the watch before returning it to her.  She hadn't even been aware the battery had died, but wearing the watch gives her comfort. 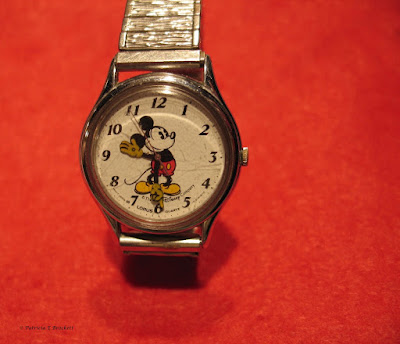