After stepping away from blogging for a bit, I'm ready to share a couple of photos at Cee's Odd Ball Photo Challenge:  2016 Week 6.

What I found interesting about this old snag was that in spite of what appeared to be at least two generations of beavers trying to lay waste to it, new growth at the base is shooting forth.  Was its inner core so strong that it was able to withstand even the gnawing of a determined beaver?  Was the beaver able to fell part of the tree and didn't come back for the rest?  There were many beaver dams along this stream of water and probably the present beaver population there could share quite the story of their ancestors who once lived there.

The next odd ball photo was taken in the same vicinity as the first.  It was a good day for capturing reflections in the water.  I found this one amusing, because it resembles an arrow pointing to something.  There were many trails, ponds, streams, and an abundance of birds to be seen or perhaps missed if one didn't stop, listen and watch.  The "arrow seemed appropriately placed. 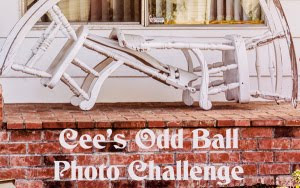